Well, it was my daughter, Shreya's, 10th birthday and I wanted as usual to do something different and new. With a lot of help from this website I froze on the idea of a Willy Wonka theme. The movie was released here that very week and therefore it was an absolutely brand new theme.

For the venue I decided to host it on the lawns of a resort here in Goa, The Radisson Silver sands beach resort. They were most accommodating and helpful in the arrangements.

Invitations: I made tickets out of Golden card paper the size of a normal chocolate bar and wrote the following message on top, "You are the lucky winner of the Golden Ticket" Date:19th Nov. At: My gate (since I was taking all the kids with me to the hotel) Time:3 p.m. don't be late. The details were mentioned on the reverse side of the card. I slipped these in the bars and my daughters had a gala time giving them out in school and later finishing the bars too. Her teachers thought this to be a fabulous idea.

Decorations: I made sweets with cellophane paper and loads of confetti wrapped up into huge sized sweets to adorn the trees. Then I made a curtain of streamers with real mini sized chocolates stuck on each streamer. This took me a good 6 hours to complete. Balloons with chocolates in them adorned the floor of the lawn and then we went on to decorate the game stalls. 5 inventing tables were set up.

On one table, The Finishing Room, the kids were supposed to decorate their own cookies with different coloured icing and eat it too, on another, The Coner Corner, I bought mini sized ice-cream cones and stuffed them with marshmallows of all kinds. The kids, with their hands behind their backs, were supposed to eat one cone from start to finish within 30 secs. This was a riot and eventually we landed up awarding them even if their mouths were full. Another table, The Raw Materials Room, was set up with 6 bowls of different powders which they had to taste and guess, like cocoa, pwd. Sugar, salt, chocolate powder etc. For another table I strung chocolate bars all over a tree and marked a boundary around. The kids were supposed to at least try and touch the chocolates with mini sized bows and arrows, which awarded them the chocolates and coupons(the coupon bit I will explain later). And for the last game, The Bubble Room, I heaped loads and loads of chewing gum on the table especially the sour centre ones. The kids were to blow a bubble and hold for 10 secs to win. And for each game won the kids were given a golden coupon each. The coupons were numbered according to the tables. Only one coupon per game was considered at the end though the kids could keep trying till they won. And this they sure did.

After these games we opened the Sundae Bar with 6 flavours of delicious colourful ice-cream and loads and loads of toppings, where depending on the number of coupons that a child won he/she could make an ice-cream sundae all by themselves with only those make scoops of icecream. That is if a kid won 2 coupons he could use only 2 flavours to make his sundae and if he won 5 then he/she could use 5 flavours. The kids had a ball making and messing up their sundaes with some clever ones using one coupon at a time and coming back time and again ti encash the others.

After this we had a scavenger hunt where I asked the kids to scavenge for 10 items totally. We divided the kids into groups and gave each group leader a bag and the clue list which I made totally in rhyme, for example for one clue I wrote 'To win the game you now aspire, something off the birthday girl's attire'. Boy oh boy did they raid the poor girl for this one (since I knew they would I over accessorized her that day and did not tell her that this would be one of the clues'. A creepy crawly look for next, Bagging it however will be a pest' proved to be a hilarious clue. The winners of this hunt were awarded with a chocolate hamper and the second in line were given a sweets hamper.

After this we opened the chocolate fondue counter where the kids had a gala time dipping pieces of cake into rich gooey chocolate. Then we gave away 12 on the spot prizes for on the spot events.

Then we cut the amazing chocolate cake which was done up like the opening landscape in the movie where Willy wonka shows them his famous chocolate waterfall and takes the kids in the boat on the chocolate river. All this was created on the cake. The chefs came out with the cake amongst great fanfare with sparklers and spray cans and loads and loads of hullabaloo.

The food layout, vegetarian, served every style of food from Indian to Italian to Chinese all made out to cater to kids. For the main take-away I gifted the small kiddies with creative kits and the big ones with children cameras, not expensive at a dollar and half each. It was an amazing experience and the kids can't seem to stop talking about it in school.

Thank-you birthdaypartyideas.com for helping me throw such a success. 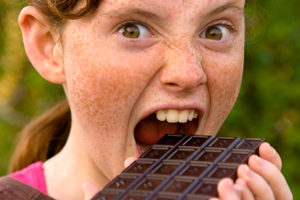