Marinda in Indianapolis, IN  USA

My daughter is a January baby, so I wanted to have a snow themed first birthday party.

The invitations were simple but cute I printed the invitation on the computer onto white card stock.  I then backed it with teal card stock, and then hot pink card stock.  I looped a ribbon through the top and tied a simple bow.  The ribbon was hot pink with white snowflakes.  Wording for the invitation:  You are invited to ####'s Winter Wonderland!  Please help us celebrate ####'s First Birthday!  Date, Time, (Last Name) Igloo  Please RSVP to the Ice Queen at (phone number).

I waited until close to Christmas when decorations were starting to go on sale.  I purchased tons of white and blue plastic snowflakes (sold in packs of ten for a dollar, though on clearance for much less!).  Instead of streamers, we hung snowflakes all over the ceiling in varying heights.  It was shiny and beautiful and very classy!  The table was covered in an iridescent table cloth.  The kitchen counters were covered in white batting to look like snow, and then sprinkled with iridescent flakes.  I borrowed snowmen from my family and friends, and there were snowmen EVERYWHERE!  My only rule was that they could not have any Christmas colors I wanted all blues, purples, and pinks.  During Winter Break, my four year old and I made two HUGE snow people to hang up on the wall.  They went from floor to ceiling.  I cut the large white circles from bulletin board paper, but he did the rest.  He made hats, buttons, noses, eyes, mouths, scarves and mittens all from felt.  They were precious!  It made him feel like a special part of the party!  (We donated them to his preschool class's bulletin board after the party!)

Guests all received a pink, blue, or purple fleece scarf when they arrived.  These were our party wear, instead of party hats!  They also served as nice treats for the guests to take home.  They were very inexpensive, as I bought the fabric when it was on sale at a local fabric shop.  Guests were asked to sign a snow-flake decorated scrapbook page for the birthday girl.  I do this at every party it allows for personal messages, but is much more compact than keeping tons of cards.

For food we had a Snowgirl shaped cake, wintery colored M&Ms, chili, vegetable soup, peanut butter sandwiches, Snowgirl Oreos, and of course hot chocolate.  To make the Snowgirl Oreos, we dipped Oreos in white chocolate, added pink M&Ms on the sides to look like earmuffs, and halved orange Skittles for the nose.  We used tubed icing to make the connector between the two M&Ms (to make it look like the headpiece for the earmuffs) and for eyes and mouths.  They were so easy, and a huge hit!  The children all received snowman sippers to drink from (after Christmas sale for 24 cents each blue and purple hats on the snowmen, no Christmas colors!).

Everyone left with a goodie bag filled with Snowgirl Oreos, Winter Wonderland pencils, a snowman story book, hot chocolate, and personalized mini candy bars.  (For the candy bars, we made a cover on the computer and taped it on silver snowflake covered Hershey bars.  It had a Snowgirl and the words Thanks for helping us celebrate ####'s first birthday!  We hope you had SNOW MUCH fun!)

Before leaving, each guest had a picture taken with the party girl.  My four year old and I made snowman picture frames (from Oriental Trading) and wrote the Thank You letters on the back.

Later in the week, each guest received their Thank You attached to the magnetic picture frame with a photo of themselves with the new one year old!  :)

The party was a hit!  It was simple and elegant.  There were lots of games we could have played, but since she is only one, we decided to just focus our attention on her... and she loved every minute of it! 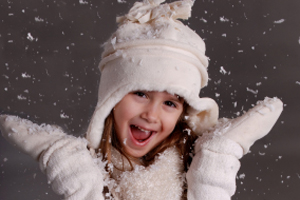