For my sons 1st birthday party we decided on a Winnie the pooh birthday theme as my son loves pooh and it was actually the first word he said!! I started preparing about 2 months in advance so that I was able to collect all the pooh items and also have enough time to prepare the invitations.

Invitation: I decided to make the invitations personally. So I took sum yellow chart paper n cut out cards which when folded into half measured 10 x 5. Next on a plain sheet of paper I drew out the figure of pooh (about 2.5 x 2.5) and coloured it. I made copies of the pooh picture and then cut it out in shape. I got some cloured sheets of paper n cut out small (about 1 x 1) sized shapes of a cake, drum, balloons, gift box and birthday hats. On the front of the card I stuck in the bottom left corner the pooh ( slightly raised by putting under the picture some cotton wool so that it was highlighted as the theme was pooh.) on the top right corner I stuck 2 balloon cutouts that I made and also pasted a black thick thread at their ends. The front of the card read:  It has finally come, it is finally here Seems like we waited for over a year! Inside the card on the left side I stuck the coloured cutouts of the cake, drum, hat, gift box and 1 more balloon in a column one below the other giving them finishing touches with coloured pens. The inside read:  We can hardly believe though we've had so much fun Little Hamza is turning one   For our special boy who'll celebrate 1 yr We will gather, enjoy sing n cheer  One little candle on the cake The first birthday wish to make  There will be balloons festoons n lots to do Come, enjoy with friends & pooh  Play as much as u want, jump up n down But don't miss the magician and the clown  Join in . There will be games and such But without you it wont be much  Pooh n Hamza cant wait 4 u 2 join   The fun kicks off at 6pm, 31st august 07 zabeel park dubai.  All the invitations were hand written in red.

Venue: since we were expecting about 50 guests we decided to rent a place for the evening and we found a brilliant party hall in a city park.

Decoration: the decoration consisted of flowers made with red and yellow balloons stuck on the wall alternating with pooh and his friends wall posters. There were also pooh festoons put on the wall. I also put up a pooh door banner at the entrance together with a pooh door mat. The tables were covered in yellow disposable table covers that were easily available in the supermarket. I kept one table covered with a pooh table cover (also from the supermarket) which served as the cake table. The chairs and tables were all put on the sides of the hall and the centre was left empty to let the kids play.

Entertainment: I hired a pooh mascot, a clown and a magician to keep the kids and adults entertained.  Welcome: at the entrance of the venue I had a table covered with yellow cloth. On it I kept pooh stickers, name badges, and hats. I made the pooh badge by drawing out face of pooh and clouring it yellow. I cut round badges (about 3 cm in radius) from yellow chart paper and stuck the pooh face on it. Beneath each of them I wrote (in red) the name of the kids that were coming to the party. On the top of the badge I put a small safety pin. This badge was then pinned on the shirts of the kids as they entered and this helped me recognize and call them by their names through the party. They were also asked to choose which pooh sticker they wanted to put on the back of their hands and they loved the idea. Some wanted pooh, some Tigger and some Eeyore and Piglet stickers. I also handed them a hat each. The hat was made from foam paper. In the centre I stuck the face of pooh in half of the hats and the face of Tigger in the other half. Each hat was also numbered to be later used in a game.

Kids games:
1.Maze:  I found a simple pooh maze game on the net. I took several printouts of that. The kids were handed out a sheet each n given a pen. Whoever handed out the correctly completed maze first was the winner.

2.4 chairs: I took 4 chairs and on each one of them I put a label. One had pooh label, one had eeyore, the 3rd had piglet n the 4th tigger. The chairs were put in a circle with some distance in between. When the music played the children were to run around. As soon as the music stopped they were suppose to choose any one chair and stand next to it. I would then pick up a chit ( I had 4 chits of pooh, eeyore,tigger and piglet).whichever chit was drawn was the group that would be out. For example if the pooh chit was drawn then all the kids standing around the pooh chair would be out and then the game would continue again with the remaining children till we were left with 4 winners.

3.Lucky draw: I had some numbered chits prepared. One chit for each hat given to the kids. All kids were asked to wear their hats. Then all those with pooh hats were asked to come forward. Hamza picked one chit. The number on the chit was read out aloud. The child with the same no hat was the winner. The same was done with the tigger hats.

4.Tail eeyore: similar to tail the donkey…just that the donkey was replaced with eeyore.

5.Pooh says: similar to Simosay where Simon was replaced with pooh. PiÃnata: the pinata was of course a pooh pinata. I filled it with pooh chocolates (that I got from a Disney store) pooh pencils, pooh erasers,pooh sharpeners, pooh felt pens, pooh confetti and some more small toys like balls and cars. I also put in a small pooh soft toy in it. All the kids were handed out small yellow tumblers (on which I wrote hunny with black glass liner tube paint).it was their hunny pot to collect the pinata goodies. Our winner was the child who got the pooh toy from the pinata!

Adult's games:
1.Word search: I got a pooh word search game from the net and took many printouts. All the parents were given a sheet each and a pen. They were given 2 mins time. Whoever got most of the words in the maze won.

2. pooh's hunny pot: I took a terracotta pot and painted the word honey on it. I filled it with 15 odd items such as toothpick, clip, safety pin, pen, comb, paper, lipstick, eraser etc. one by one I held out and showed each item in the pot to the adult audience. The items were then kept back in the pot and the adults were given 30 sec to recollect what all was there in pooh's hunny pot and put it down on paper. The person who got max no of correct items was the winner.

3.Weight of hunny: I got 2 bottles of honey from a grocery. The parents were asked 2 guess the combined weight of honey in both the bottles. An answer could not be repeated and everyone had 2 give a different weight. The one who got closest to the exact amount was declared winner!

Return presents: all the kids were given a red gift bag in which was included the following favors: 1.Winnie the pooh dinner set (consisting of a plate, bowl, glass, spoon and fork) easily available in a Disney store. 2.Winnie the pooh blow out 3.Winnie the pooh stickers 4.Winnie the pooh colours 5.Winnie the pooh stationary set (included eraser, pencil, scale and a small note pad) 6.Winnie the pooh colouring book (this I made at home by downloading colouring pages from the net and making copies of them. I then got each book of about 10 colouring pages spiral bound. On the cover page of the book I put a coloured picture of pooh and his friends which I also got from the net. Below the picture I wrote---Thank you for making my birthday Tigger…iffic!!  Hamza To personalize it further I put thumb prints of my year old son on each book beside his name.  It was a lovely party and everybody who came really appreciated the effort and the eye for detail. My son was also happy throughout the party because he loved to see pooh all around him!  Thank you for some of the ideas I got from your brilliant site. 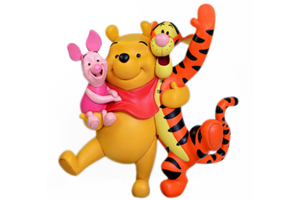